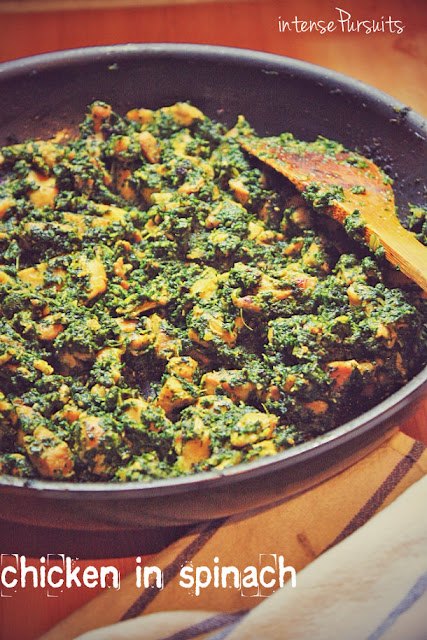 Sometimes experiments in the kitchen become revolutionary....and this was one of those moments. Well, I did not create no revolution. Its just that this experiment of mine turned out better than I could comprehend. It tasted so good that I myself was surprised. Not only a quick recipe but also a very healthy one. Also for someone who doesn't like to eat spinach (is it possible?) this would be a great way to incorporate this amazing leafy green.

A frozen block of spinach indeed is a revolutionary item. The amount of time and work that goes into preparing fresh spinach just to get it into the pan is tiring. And I feel like frozen spinach tastes even better than fresh sometimes. Oh and most importantly no need to worry about the soil particles that often linger at the fresh spinach roots.
Cutting to the chase, take the two blocks of spinach along with the garlic and ginger and blend it into a smooth puree. It might look like a lot of spinach compared to the chicken. But remember that spinach holds a lot of water which will evaporate during cooking.

Take the boneless chicken thighs and cut them into cubes. Now that everything is prepared, heat a flat pan on the stove at medium high. Heat the oil in the pan. Slice the onion thinly and fry them in the oil.
Take the coriander seeds in a mortar and use the pestle to grind them. You don't want a smooth powder but a rough grind. Toss this into the pan with the oil and the onion. This will fry the hand ground coriander seeds and release its aroma. Take half a cup of water and mix the cumin, red chili, and turmeric powder in it. Pour this mixture into the pan. Cover the pan and let the spices cook.
When the water evaporates and the oil rises, sprinkle in the garam masala powder. Then toss in the cubed chicken pieces. Fry the chicken pieces for awhile until all the sides of the chicken is browned and the spice has mixed well with the chicken.
Now pour in the spinach mix. Do not cover your pan this time. Otherwise the water in the spinach will not evaporate. Keep cooking and stir once in awhile. Don't forget to add salt and a pinch of sugar. Cook and stir until the spinach is cooked and most of the water has evaporated. There will be no water left over. Taste and adjust seasoning. Serve with rice; make a taco; or eat it just as it is. It tastes great either way. Bon appetit!