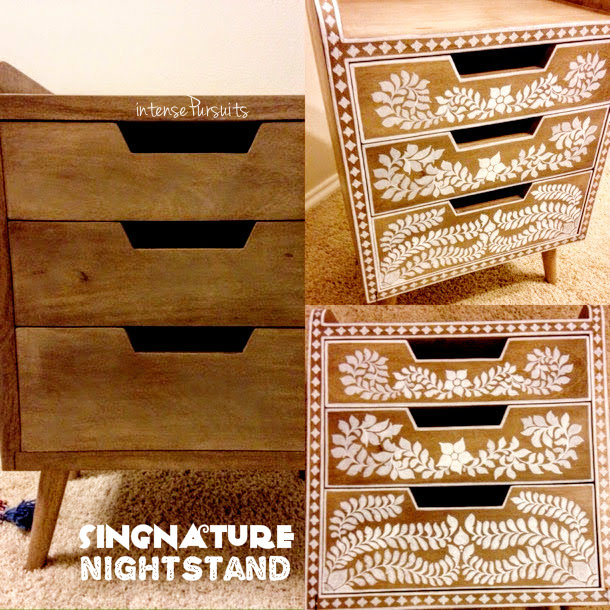 When I started looking for nightstands to go with our tufted grey bed with hammered nailheads, I had no idea that this is what I would end up with. I thought of many different options - small to large desk-like nightstands that could serve as vanity. There are two windows that flank each side of the bed. So my option was to go compact or large vanity-like desk that would sit in front of the window giving me natural light for the vanity. But then I actually set up my vanity before I found my nightstands. It's a small vanity made of a shelf drawer with brackets underneath for support. I will post about that soon! 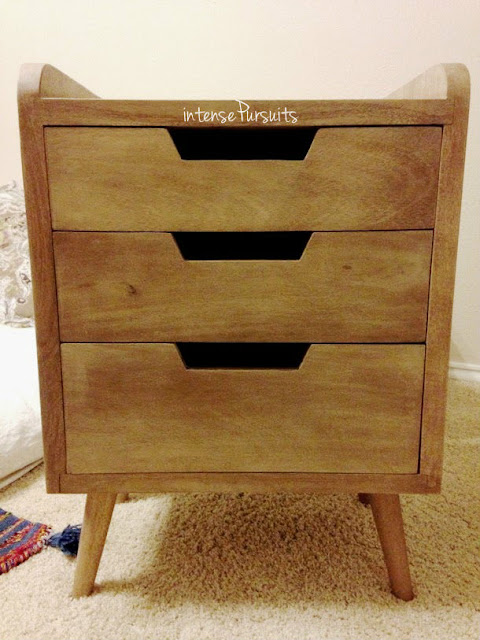 So after the vanity was settled, I knew I had to find compact nighstands that wouldn't hide the tall windows by the side of the bed. When I saw these simple wood mid century style nighstands at World Market, I immediately knew that I would personalize it with my own touch. My signature! 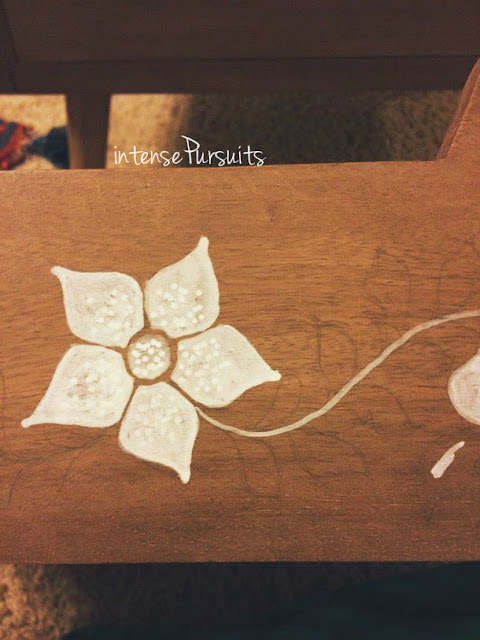 I love the Indian bone inlay furniture which are overly expensive because of the material. But that was my inspiration for the nightstands. I have used Sharpie paint markers before for other projects and I knew it would work perfectly for these wood pieces. Choosing white over the natural wood was my choice because it would work easily with the other colors in my bedroom. I also like the bedroom to feel calm and serene - a place to unwind. Hence, I use subdued colors and hues and a lot of whites. And then add a pop of color in a throw pillow or object somewhere. 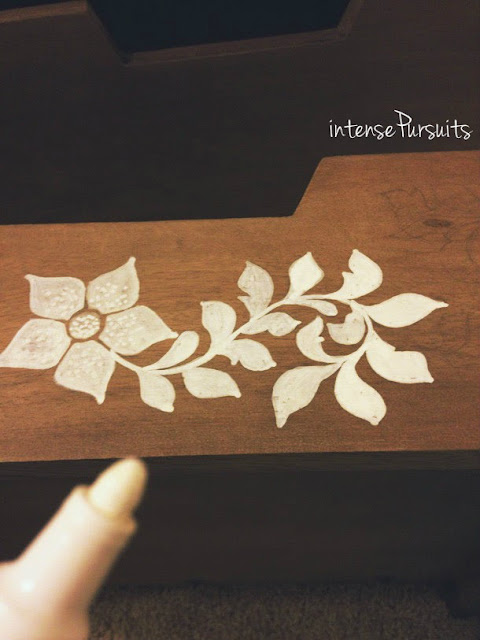 I had to use guidelines for what I was going to paint over. So I used a pencil and drew my design lightly before applying the Sharpie Paint Marker. I love how the marker gives a paint like nature to the prints. 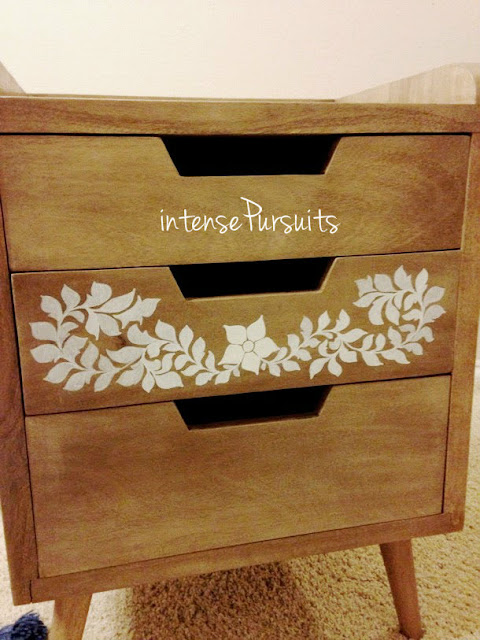 I did the middle drawer first so that I knew how to balance it off in the other two drawers. I seriously went along with it and added design wherever the patterns took me. I did not plan anything concrete. 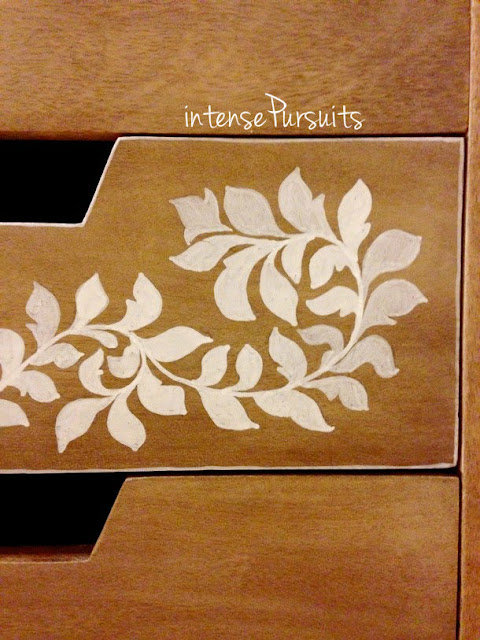 After I did the vines, I decided to add the white borders around the drawer fronts. I was not too sure of it, but once I drew it I immediately liked how it looked. 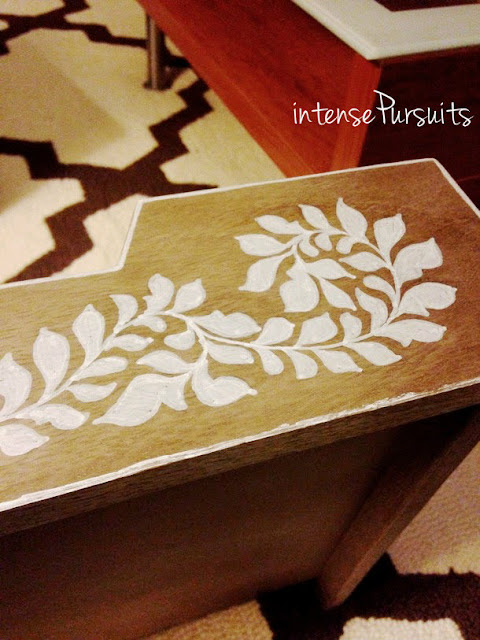 I started with thin white borders but then thickened it so it could be noticed easily. 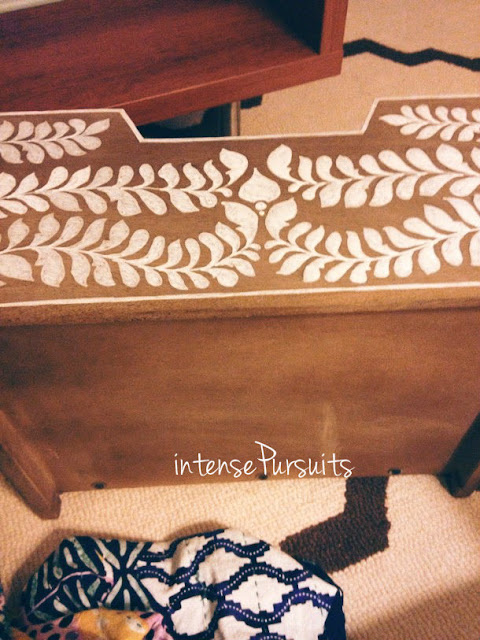 I did the bottom drawer last since I knew it had to be different because of it's bigger surface area. I doodled every day after work little by little while watching Netflix. 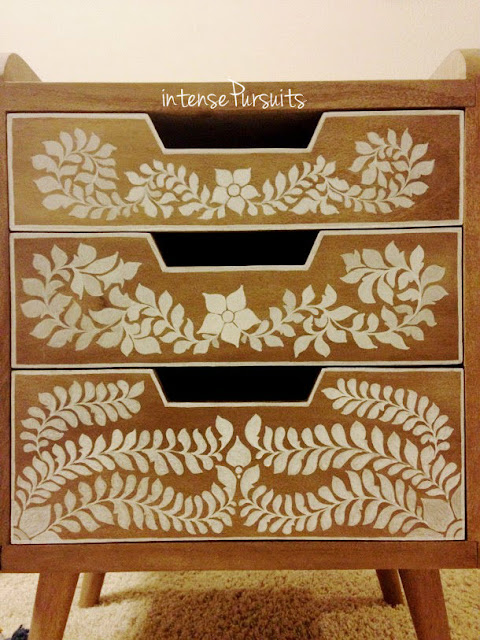 Once the drawer fronts were done, I seriously did not know how to proceed. I was even thinking of covering the entire nightstand with the vines. 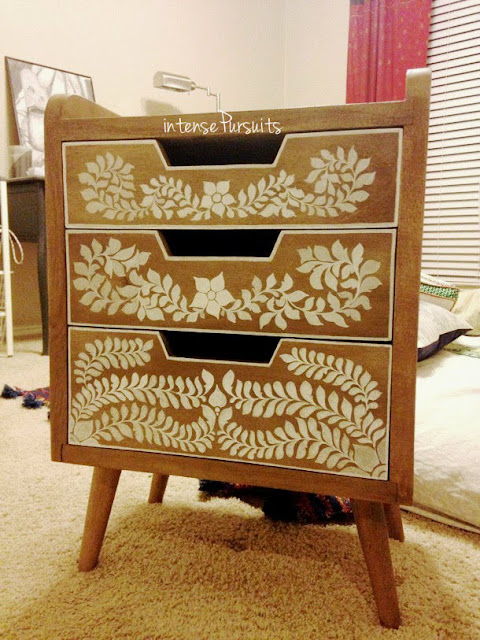 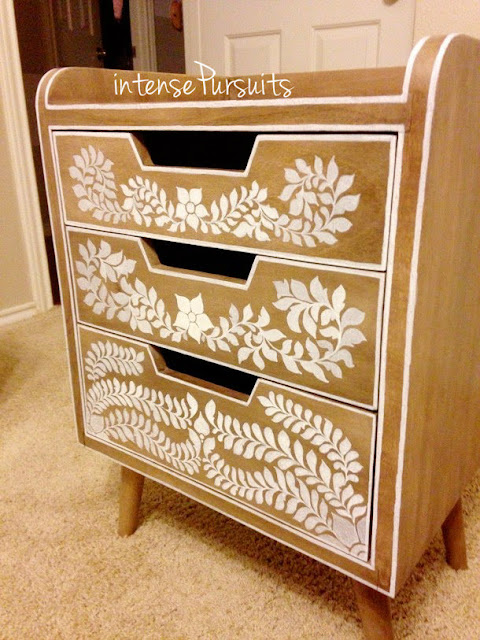 After this I had to think of a pattern that would go inside this outline. And thats when I started doodling patterns on paper. Here is a link to one of them during work! 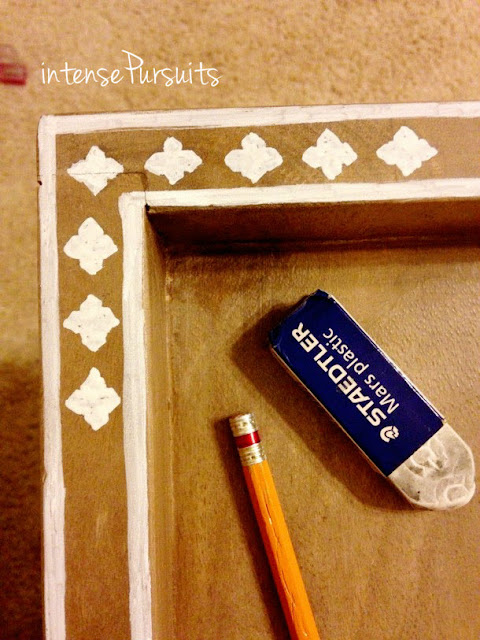 The space between the outline was real narrow. So I had to really squeeze in these diamond medallions that I created. These I drew freehand because it was very hard to get the exact shape with the thick head of the sharpie. 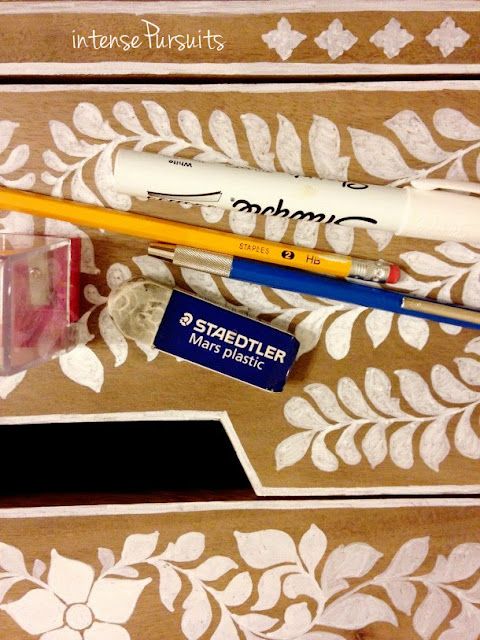 When you look closely, you can see how oddly shaped they are. But when you look at the nighstand as a whole it really looks much better. 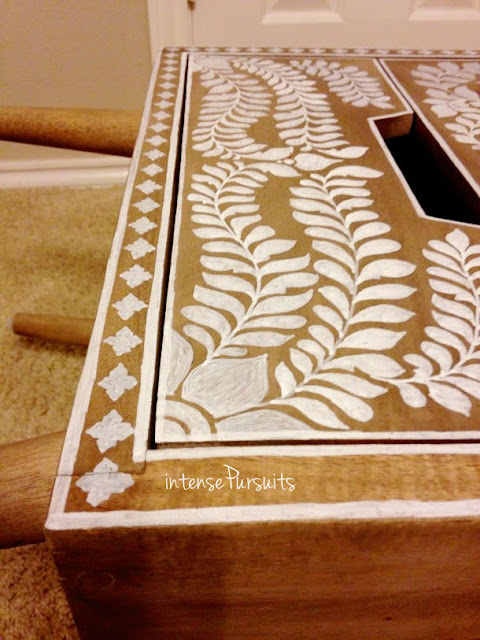 I also eyeballed the spacing between each medallion. They are not perfect but thats what happens when you handcraft or handdraw. Thats the beauty of handicraft. 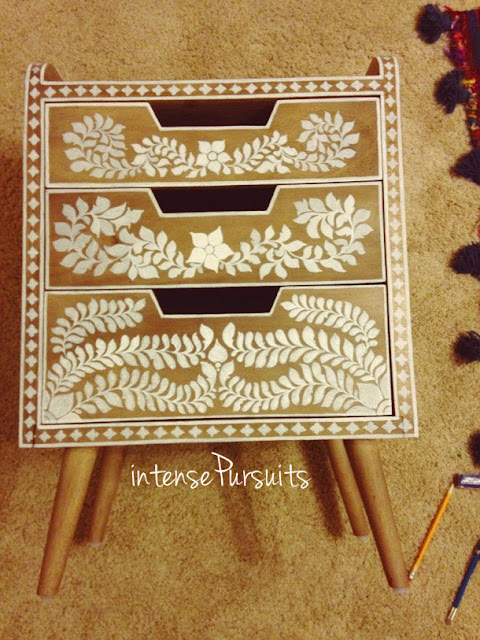 I decided that it was quite enough doodling on these simple creatures although my initial plan was to cover the whole thing with the vines. I like how the outline gives it more structure and enhances its frame. 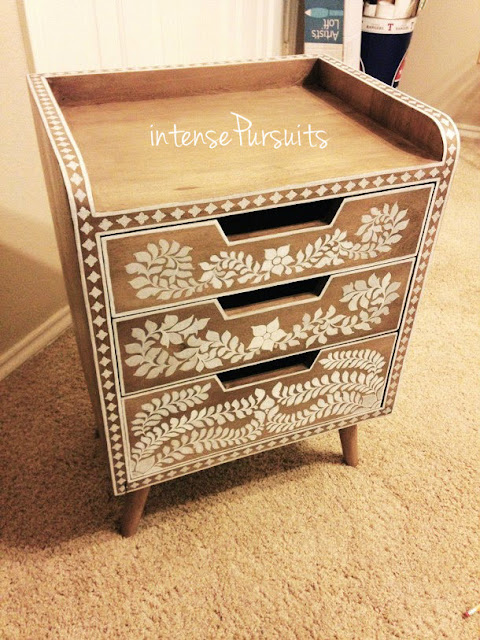 But now I have to draw this same thing all over again on the other nighstand. Let's see how far I get. But once they are both done, I will be sure to post right here! 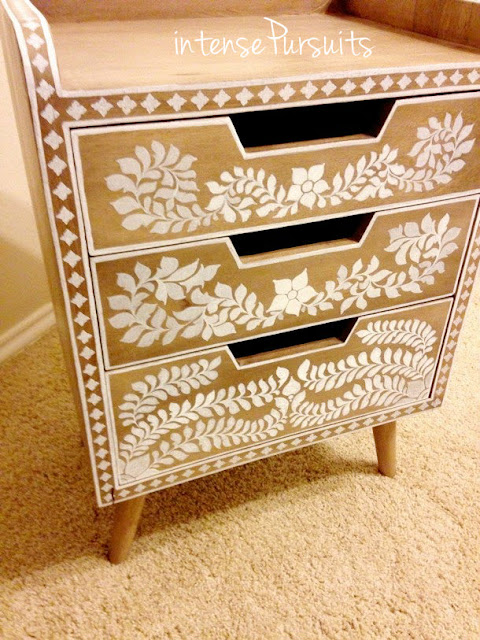